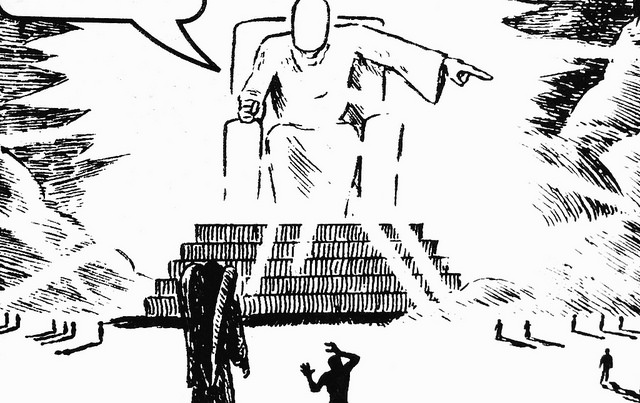 The seeds of an Angry God theology were sown early in my life and they came in the form of cartoons — the infamous gospel tracts by J.T. Chick. With titles like This Was Your Life, Somebody Goofed, The Awful Truth, and Are Roman Catholics Christians?, Chick tracts usually end with everyone but fundamentalist Christians being hurled into what looks like the fires of Mount Doom by a merciless God depicted as a faceless white giant.
A well-meaning but unhelpful Sunday School teacher gave me a Chick tract when I was twelve and those garish images with their ludicrous theology burned their way into my adolescent imagination. I had met the Angry God! And I was afraid of this God. Who wouldn’t be? Think about it. In the Gospel According to J.T. Chick, if you don’t believe just right, an omnipotent giant will consign you to eternal torture!
Fortunately, I could believe in Jesus and be saved from his Father — the Angry God. But then I heard a revival preacher ask a disturbing question: “Do you believe in Jesus in your heart or just in your head?” He went on to say that if we believed in Jesus in our head but not our heart we would miss heaven by eighteen inches and wind up in hell forever! More anxiety-inducing theology! Now I had to decide if I had faith in my heart or if I was on my way to hell because I only believed in Jesus with my head. That’s a lot of pressure for a twelve-year-old…or anyone.
CLICK HERE to continue
Posted by Brad Jersak at 8:50 AM