“From whence come wars and fightings among you?” – James 4:1 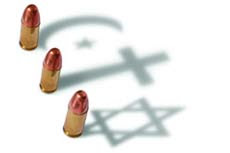 During a time of feasting and festivities when we deck the halls, hang ornaments and lights, resurrect the nativity scene from the attic or garage, buy and wrap presents, bake and consume cookies, enjoy dinners, concerts, friends and family – lost is the fact that violence and refugees are part of the story of the first Christmas.
Just before Herod’s massacre of the innocents in Bethlehem an angel warned Joseph to take Mary and Jesus, and to run for their lives to Egypt. Idyllic scenes depicted on Christmas cards notwithstanding, an undercurrent and backstory of violence forms the story of the first Christmas – just as it does during this Christmas season of 2015.
The following is an excerpt from my book “Rejecting Religion – Embracing Grace,” published in 2010. In this section I maintain that “religious violence is an inevitable product of Christ-less, fundamentalist, legalistic religion, followed to its most logical and extreme conclusion.”  Here, on pages 133-135, are five steps/stages leading to religious violence:
Stage One—Acceptance: Acceptance of the belief that rules, regulations and rituals build a relationship with God is the first stage that actually lays the groundwork for religious violence. Within Christendom, Christ-less religion is the belief that our performance of prescribed rules and rituals is the only way to please or appease God, and that our standing with God is dependent upon the quality of our performance. The idea that what we do enhances or improves our standing with God, so that he will love us more because of our performance (more than he would have had we not put forth the effort) is the un-grace of religion. This “philosophy” by definition involves no grace, no relationship, and therefore no Jesus. This “philosophy” is religion—rules and performance. Performance-based religion itself is the foundation that can lead to violence and bloodshed.
Stage Two—Immersion: After buying into the belief that performance of rituals and rules determines a loving relationship with God, many become even more deeply involved in religion. They immerse themselves in a religious organization/charismatic teacher whereby their religious progress can be monitored and directed. Within this religious cocoon and holy huddle, they can be guided by professional religionists and co-religionists who preach and preside over a philosophy of salvation-by-self. Those who practice Stage Two religion are deluded into thinking that God is happy with them because they are doing what the religious organization prescribes. This stage often blurs the distinction between God and human religious authorities.
Stage Three—Indoctrination: Those who descend to Stage Three become true believers. Without reservation those who are enslaved to religion embrace rules of measurement whereby they condemn not only themselves, but everyone else—within their own religious institution and without. Followers of religion who function at Stage Three are fully indoctrinated, becoming religious addicts. Those unfortunates who are imprisoned in this stage begin to accept their religious organization and its religious authorities as “the word of God” and “his only true, anointed prophets/leaders” on earth.
Stage Four—Extremism: Religious slaves who experience Stage Four find themselves in some of the deepest cesspools and most foul swamps religion has to offer. Extremism begins to characterize those who are hopelessly in bondage to their particular religious chain gang. In some cases, individuals at this stage blow up abortion clinics while others blow up civilian targets of the “Great Satan.” Those in Stage Four have so totally bought into religion that they have sold their soul to the devil. Once individuals believe they are acting on behalf of God, physical violence often follows. This violence in the name of God can be turned inward, as in self-inflicted wounds, self-flagellation, self-starvation, and the like. It can be aimed at fellow religious organizational members as punishment for infractions in the form of beatings, isolation, exposure, and even torture. When the violence is directed toward one’s own peers, then it is thought to be “for their own good.” Of course, the violence also targets perceived enemies of God on the outside using vandalism, muggings, torture and the severing of body parts. Rules must be obeyed to please God. Punishing rule-breakers pleases God. Stage Four stops short of murder, which leads us to Stage Five.
Stage Five—Fanaticism: The most toxic and dangerous religious slaves are somewhat like robots, so brainwashed that they will take human life in the name of God. Enemies on religious hit lists may be inside or outside of the organization. Lynchings, honor killings, assassinations, public beheadings and suicide bombings are all too familiar examples of religiously motivated killings. Religious fanatics who experience Stage Five become judges and executioners, and if “martyred” they become a hero to their fellow-extremists. In Stage Five, all pain is projected outward, and the enemy is identified, hated, attacked and annihilated. All inner ugliness is projected onto “sinners”—all hate (especially self loathing) is projected onto “heretics,” all of whom must die.
Al Qaeda, by all reports, is a Stage Five religious organization. The Judean leaders of the 1st century A.D. were perhaps a Stage Three organization with some Stage Four elements, and with an unfortunate pattern of using some of its followers who “progressed” into Stage Five when deemed necessary. They were no Al Qaeda. But they were no sewing circle either.


The common denominator, the common ingredient present in all five stages is the rejection of God’s grace. Each stage progressively diminishes critical freedom and thought, and becomes more legalistically demanding than the one before. It all begins with the religious delusion to which humans so easily fall for—the glorification of human performance. All this hatred, bigotry, violence and mayhem begins with religion.
Posted by Brad Jersak at 2:43 PM