Dulce et decorum est pro patria mori
"It is sweet and fitting to die for your country."
Horace, Odes (III.2.13) 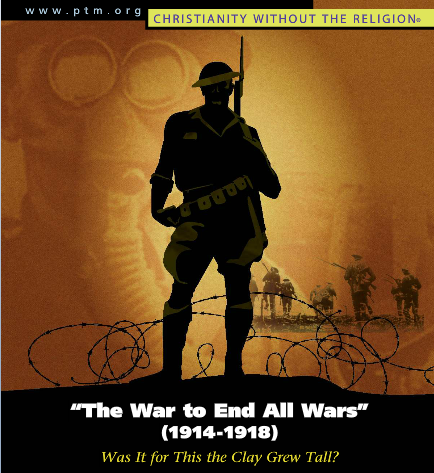 Bent double, like old beggars under sacks,
Knock-kneed, coughing like hags, we cursed through sludge,
Till on the haunting flares we turned our backs
And towards our distant rest began to trudge.
Men marched asleep. Many had lost their boots
But limped on, blood-shod. All went lame; all blind;
Drunk with fatigue; deaf even to the hoots
Of tired, outstripped Five-Nines that dropped behind.
Gas! Gas! Quick, boys! – An ecstasy of fumbling,
Fitting the clumsy helmets just in time;
But someone still was yelling out and stumbling,
And flound'ring like a man in fire or lime . . .
Dim, through the misty panes and thick green light,
As under a green sea, I saw him drowning.
In all my dreams, before my helpless sight,
He plunges at me, guttering, choking, drowning ...

Dulce et Decorum Est? Sweet and fitting? Owen goes on to bitterly describe the convulsive gargling of ‘froth-corrupted lungs’ and says NO! Participants in ‘the Great War’ would never recount such a lie to children who dream of doing or being something glorious.

The Greek poet, Horace, who coined the phrase, had never seen chemical warfare. Neither had we until network news brought us images from Syria last year—hundreds of civilians, including children, wrapped in death shrouds awaiting burial. Barbaric. Inhuman. But remember who it was that first invented and employed gas attacks: supposedly ‘Christian’ nations at the height of industrial civilization, mutually destroying one another in the greatest human disaster since the Black Death (1348-50). Nine million dead before all is said and done.

Wilfred Owen knew the futility of war. Like Mr. Howell, an English teacher by profession, Owen enlisted after visiting wounded soldiers in a hospital. He fought for two years, was injured, but then returned to the front. Three months later, on Nov. 4, 1918, he died in a machine gun attack, exactly one week before the war ended.

CLICK HERE for the rest of the article
Posted by Brad Jersak at 1:00 AM