A tale of greed and political corruption mixed in with a good dose of family values.
Forris B. Day 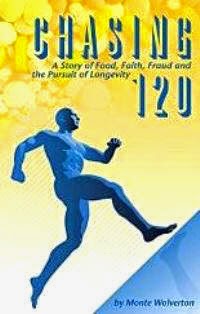 This review is from: Chasing 120: A Story of Food, Faith, Fraud and the Pursuit of Longevity (Kindle Edition)

“Chasing 120” is a story of corruption and deceit. Dr. Tyler Belknap was a former ad executive turned preacher. Down on his luck he uses his skill in sales to build a huge empire called Wellness 120. It revolves around the fact that Belknap believes, or sells the idea of, people living to the age of 120 years old by eating the right foods. As a preacher he uses the Bible as his source for information and he creates a cult following of his Wellness 120 concept. It's in the Bible so how can it be wrong?

Belknap makes millions of dollars on sales of his supplements that supposedly help people reach their goal of living till 120. No one doubts him. Problem is Belknap is a con-man and sham artist. When people start getting sick from his supplements his empire begins to crumble.

A well written tale by author and political cartoonist Monte Wolverton. The characters are multilayered and extremely interesting. The story is believable because we see people like Belknap everyday on TV hawking their products and nonsensical beliefs. I really enjoyed the family relationship between the main characters Dave Whitman and his wife Marcia. Dave has worked at Wellness 120 for years and we come to realize even most of Belknap's employees are brainwashed. The turning point for the Whitman's is when their son becomes ill and they must face the reality that it is the supplements that have caused his problem.

I am not a religious person so when I started reading this I had it in my head that I wouldn't enjoy the story knowing it has religious undertones. I struggled through the first chapter because of that fact. Once I realized the story wasn't pushing Biblical ideology I fell into the story and really enjoyed it. Sure it has verses from the Bible but they were placed in the story appropriately and didn't feel forced at all. The story moves at a nimble pace and the book is a quick read. Bottom line is I recommend the book to anyone who likes a good conspiracy tale with interesting characters. Belknap is both lovable and detestable. He does good things for people but like all con-men he is really doing these things for his own hidden agenda.

Author Monte Wolverton has created a story that I feel just about anyone will enjoy. He has political corruption, evil characters and likable ones too, and some really cool locations within the pages of his book “Chasing 120
Posted by Brad Jersak at 10:39 AM