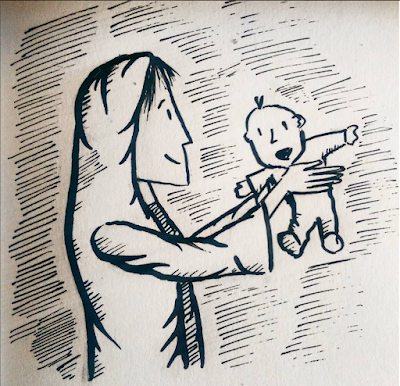 God became human in Jesus Christ. God cannot become something evil. God does not become something God hates. May your outlook on humanity be informed by God's profound solidarity with humanity—with every single human person—in the Incarnation of the Son.
The central Christian conviction is that the Creator of all things, the God who spoke the worlds into existence from nothing, the One who holds all things in life, became a mere human.
God did not become a human with immunities to ordinary physics, with a body impervious to pain or disease. Jesus was *not* Superman.
And Christians confess at the same time that this ordinary man from Nazareth was not someone with godlike qualities but God—the God.
And I just want to say two things about this startling confession that God became flesh: God cannot become something evil and God does not become something God hates.
Humanity was made by God and God only makes good things.
God cannot make evil.
Humanity is inherently *good* and declared good by God on the sixth day of their creative work. And if this were not so, if humanity was inherently evil, God could never have become one of us.
Too many humans hate humanity, and in our hatred for ourselves we too often focus on the worst things that humans do. And it's true that we are all of us not well; that we are all of us in need of the healing work of God.
And yet, in spite of dark angelic and human contempt for humanity—even as many of us seek to escape our humanity, and leave this incarnate, embodied state—God chose to so identify Godself with the human family as to take on human flesh forever in the person of the Son.
Because of Jesus an embodied human is one Person of the Godhead, and God has therefore manifested in Christ an intimate solidarity with every human person. Everyone.
And though every human is in need of God's grace and forgiveness and redemption, and though we have all fallen short of God's created intentions for us as humans, and though we have failed to love as God loves, and though we have walked away from Love, God chooses—of all things in his creation—to unite himself to the human race, to be one of us, to put to everlasting shame everyone and everything that would oppose the human.
Think of the person you despise the most, the human that inspires hatred in you, who makes your skin crawl, whom you loath, and then come to understand something and come to understand this at your core: God has in Jesus Christ drawn nearer to that person in love than it is possible for you to understand or articulate, that God desires that person so much that God died to have never-ending friendship with that person from age to age.