Why Do Many Christians Make the Good News Sound So Weird? - Monte Wolverton

Among some folks, the ability to speak fluent "Christianese" is a sign of true Christianity. But do these special words and phrases help or hinder the message? Here's some suggestions as to how we as Christ-followers might improve our communication skills.
—Text and illustrations by Monte Wolverton 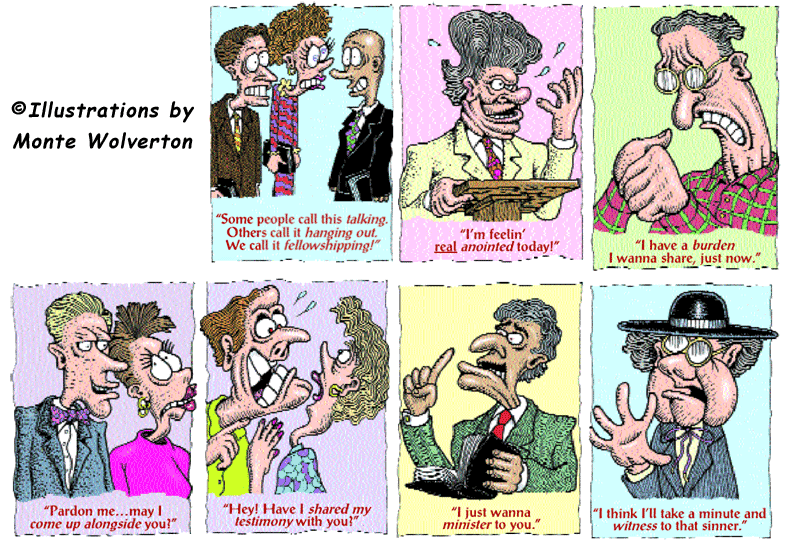 I just want to come up alongside you. I have a burden—because God has laid it on my heart to minister to you and disciple you. God spoke to me, and he wanted me to share my testimony with you and to witness to you. The message I'm called to give you will be a real blessing to you.

Chances are, you know some people who talk this way all the time. Maybe you are one. You might know others who don't use this kind of language everywhere, but reserve it for use only when they are in the company of fellow Christians.

In certain groups, the ability to speak fluent Christian jargon seems to be the verification of true Christianity.

Hundreds of thousands of well-meaning Christians talk this way because they believe it helps set them apart as God's people. It's their Christian jargon.

Jargon (or inspeak) is a special set of words or phrases understood by a particular group.
Jargon is useful. The world could not function without jargon. Just about every profession has a jargon. Musicians, publishers, computer software developers, lawyers and accountants use jargon. Psychology has a separate jargon for each of its several branches.
Jargon is really a kind of shorthand; one word can encompass a broad meaning. It might take paragraphs—or whole books—to explain the meaning of one word to the uninitiated.
Without jargon, communication on the job, or in a profession or in a field of knowledge would slow to a crawl.

But how many times have you been in a group of computer aficionados as they started throwing around terms like USB, I/O port, co-processor, jpeg and bandwidth?

Or perhaps you found yourself among a group of printers who started talking about bi-metal plates, blankets, slurring, density, web breaks and low folios.

If you've ever been in a situation like this, one of the following things might have happened:

• You pretend-ed to understand (and probably misunderstood) what everyone was talking about.
• You became bored and annoyed and wondered why the group was so socially inept and insensitive.
• You were intimidated and frustrated, so you left.
• You were impressed by the esoteric knowledge of the group, and you wanted to learn more about how to use these mysterious words.

The last one probably didn't happen.

CLICK HERE to continue reading
Posted by Brad Jersak at 9:19 AM