The Downward Mobility of the Jesus Way - Greg Albrecht 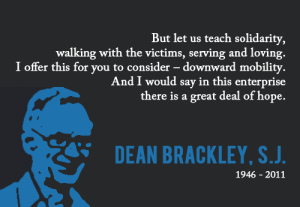 They were on their way up to Jerusalem, with Jesus leading the way, and the disciples were astonished, while those who followed were afraid. Again he took the twelve aside and told them what was going to happen to him. "We are going up to Jerusalem," he said, "and the Son of Man will be delivered over to the chief priests and the teachers of the law. They will condemn him to death and will hand him over to the Gentiles, who will mock him and spit on him, flog him and kill him. Three days later he will rise." Then James and John, the sons of Zebedee, came to him. "Teacher," they said, "we want you to do for us whatever we ask." "What do you want me to do for you?" he asked. They replied, "Let one of us sit at your right and the other at your left in your glory." "You don't know what you are asking," Jesus said. "Can you drink the cup I drink or be baptized with the baptism I am baptized with?" "We can," they answered.  Jesus said to them, "You will drink the cup I drink and be baptized with the baptism I am baptized with, but to sit at my right or left is not for me to grant. These places belong to those for whom they have been prepared." When the ten heard about this, they became indignant with James and John. Jesus called them together and said, "You know that those who are regarded as rulers of the Gentiles lord it over them, and their high officials exercise authority over them. Not so with you. Instead, whoever wants to become great among you must be your servant, and whoever wants to be first must be slave of all. For even the Son of Man did not come to be served, but to serve, and to give his life as a ransom for many."—Mark 10:32-45

﻿﻿﻿﻿Was Jesus amused or saddened by James' and John's blatant, unabashed request? We don't know. It seems that James and John were so blinded by their desire to lord it over others, to be big wheels and be in charge, that they assured Jesus that they would be willing to drink his cup and be baptized with his baptism! They must not have been listening, because just before their power-grabbing request, Jesus took the twelve disciples aside and reminded them that he was going to be condemned to death, mocked, spit on, flogged and killed (Mark 10:33-34).

The Gospel of Matthew also tells this story, adding another element (Matthew 20:17-28). Matthew indicates it was the mother of James and John who asked for the most powerful places of honor to be given to her sons (Matthew 20:20-21).

Whether it was their mother, or James and John—or both—who made this obviously transparent, self-seeking request, the other ten disciples were not happy campers when they heard about it. We assume that the other ten disciples were not only upset with James and John because they asked for the chief positions in the kingdom of heaven—but, in addition, because they (the other ten) didn't think to ask for the same positions for themselves!

The ten disciples were indignant about James' and John's request (Mark 10:41). Jesus, as he so often did, used the passion of the moment as a teaching opportunity. Jesus drew a contrast between his kingdom of heaven and the kingdoms of this world. He said that the rulers and high officials of the kingdoms of this world exercise their authority to lord it over others.

Authoritarian governing has a long and ugly record in the annals of history. More often than not rulers and kings have laid heavy burdens on people. There are many such examples in our world today—North Korea, Zimbabwe and Iran immediately come to mind. In the realm of religion, there are also many examples of hierarchies and authoritarian, top-down, do-as-we-say-or-else pastors and priests.

Jesus follows his description of abusive authoritarianism, which functions as a way to serve those who are at the top (at the expense of those at the bottom) with this declaration to his disciples: "…Not so with you" (Mark 10:43).

Jesus tells his disciples, in no uncertain terms, if you think that my kingdom is going to replicate the power-hungry, authoritarian, serve-the-big-shots-first-and-foremost kind of authority this world often sees, then think again. "Not so with you." Jesus tells his disciples that if they choose to be ministers in his kingdom then they will choose love over power.
If we want to follow Jesus, serving others in his name, then our lives will be exemplified by sacrificial love as he demonstrated on his cross rather than the crass control mechanisms of authoritarianism, whereby Christ-less religion and its leadership always gets served first, many times at the expense of those it pretends to serve. If we follow Jesus, the primary goal and objective of our life is not to move up the ladder of human importance.

CLICK HERE to continue reading
Posted by Brad Jersak at 7:58 AM