Experiencing the Peace of Christ - by Greg Albrecht 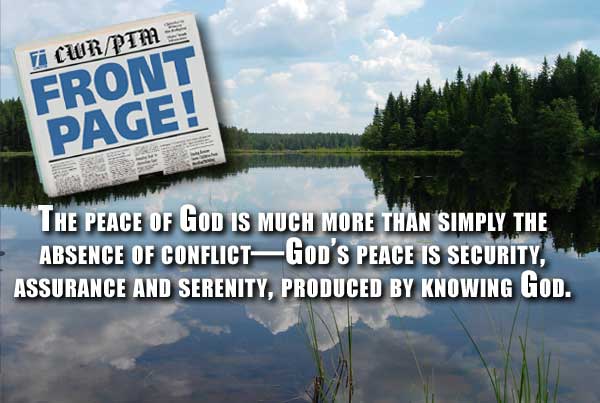 But now in Christ Jesus you who once were far away have been brought near through the blood of Christ.
For he himself is our peace, who has made the two one and has destroyed the barrier, the dividing wall of hostility, by abolishing in his flesh the law with its commandments and regulations. His purpose was to create in himself one new man out of the two, thus making peace, and in this one body to reconcile both of them to God through the cross, by which he put to death their hostility. He came and preached peace to you who were far away and peace to those who were near. For through him we both have access to the Father by one Spirit.—Ephesians 2:13-18

﻿﻿Peace is, next to love, one of the peak experiences humans most deeply desire. We desire to be in love and we desire to be at peace. What kind of peace does God offer us? The peace of God is much more than simply the absence of conflict—God's peace is security, assurance and serenity, produced by knowing God, by his grace, in a special and intimate way.

Our keynote passage is all about being one in Christ. Paul begins by talking about separation—humans from other humans, and humans from God. He continues the discussion of separation and alienation by noting the divide between Jews and non-Jews (the biblical term for non-Jews is gentiles) and all humans from God.

In the first verse of our passage (verse 13) Paul says that now, because of Christ Jesus, those of us who were once far away are now near, through the blood of Christ. We have peace because the separation—the gulf, the divide, between us and God—has been bridged by Jesus.

CONTINUE READING
Posted by Brad Jersak at 11:16 AM