The Perils of Caged and Free Range Christians - Brad Jersak 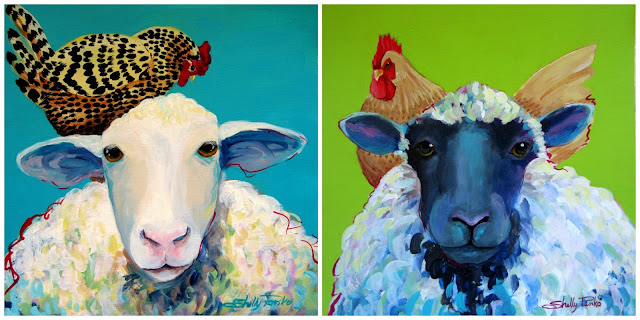 The top news item in American Christianity over the past few years continues to be the ‘nones’ (non-affiliated) phenomenon. Is the exodus of churchgoers a blessed deliverance from bondage or a cursed wandering in the wilderness? How we see it depends on one’s perspective, experience and observations … and it’s going to warrant ongoing examination. But there’s no skirting the stubborn fact that tens of millions no longer and likely will never return to the institutional church as they knew it.

For my part, I note that both churchgoers and nones can get pretty defensive and contemptuous of the other. That’s an instinctive response when we feel judged, however unproductive. Perhaps a better starting point would be an examination and admission that both paths have their challenges, and most especially when judging another’s journey obscures one’s own blind spots. So let’s take Paul’s words to heart:

“Who are you to pass judgment on the servant of another? It is before his own master that he stands or falls. And he will be upheld, for the Lord is able to make him stand” (Romans 14:4 ESV).

Indeed, I propose that passing judgment on others rather than being mindful of my own steps creates conditions as perilous to faith as the life of a chicken, whether caged or free range!


The Peril of Caged Christians

Some churchgoers assume that all nones and dones are simply backsliders who have drifted away from faith in Christ into the darkness of the world. Aside from being wrong to generalize such a judgment—negating testimonies of flight from justified disillusionment, religious bondage and spiritual abuse—we are in danger of blinding ourselves to how Jesus’ sheepfolds have often morphed into commercial chicken barns.

Many churchgoers happily enjoy their experience as sheep in the flock of the Good Shepherd who leads them in and out of the sheepfold (John 10). As long as that’s what’s really happening. The nones phenomenon should tell us that’s not all that’s happening. Their escape suggests that for many, the institutional church had degraded itself into an industry not unlike the chicken barns in our area.


My wife’s extended family has had egg-laying chickens for many decades. I’ve even helped out a few times with gathering eggs or moving chickens. This involves long barns full of 10’s of thousands of chickens, housed in restrictive cages. The chickens live their short lives confined with five or six other chickens, cramped enough such that they can’t ever really spread their wings. They exist solely to produce offerings onto a conveyor belt for the profits of the farmer.

This is a parable. Let the reader understand.

I don’t say this to give ammo to the nones. They don’t need any. I mention it so that churchgoers and their leaders can discern where the Good Shepherd’s flock of sheep has become some other farmer’s flock of caged birds. Churchgoers might ask the metaphor whether they live as Christ-following sheep or someone else’s caged chicken? And what are the cages? Who did this? How did this happen? Can it be undone?  I promise: squeezing the nones back into the cages is not the first order of business.

The Perils of Free Range Christians

Not that free range Christians are without their own significant perils. All too many nones bask in their newfound freedom, easily condemning corrupt institutions they’ve happily left behind. And this truly is something to thank God for … if the Shepherd himself called them out. Remember, Jesus did say,

“The sheep hear [the Shepherd’s] voice, and he calls his own sheep by name and leads them out. When he has brought out all his own, he goes before them, and the sheep follow him, for they know his voice” (John 10:3-4 NASB).

So it is very possible that when the sheep leave the fold, they do so because they’ve followed Jesus out. But lest the nones race prematurely into self-congratulation, they too need to ensure they are Christ-following sheep and not just free range chickens.

Marketers want us to imagine free range chickens as a joyous little flock pecking away on natural foods in the hobby farms of Portlandia. It’s a quaint utopian image. And also pretty much a crock-a-doodle-doo.

The truth is that free range chickens are typically confined in the same huge numbers to the same huge barns. The only requirements are (1.) that a door is available to a small yard … a door the chickens usually have no idea exists or how to exit or for what purpose. They aren’t in cages but don’t imagine that they leave the barn. Almost none ever do. And (2.) they are not confined to individual cages. Rather, they wander in circles amongst the mindless masses, most fattened up on hormones for inevitable slaughter. Most shocking, unlike the caged chickens, whose dung falls through the cages into a drying pit, free range chickens walk about on their own feces (and everyone else’s), pecking away at it.

This is a parable. Let the reader understand.

It is not for churchgoers to judge whether nones are faithful sheep that followed Christ out of the pen or a free range chicken eating it’s own doo-doo. But the nones might ask themselves a few questions: in escaping the perils of their religious cages, what kind of flock am I running with now? Sheep or just more chickens? And what am I consuming? Am I feeding from the meadows of grace? Or pecking at whatever’s coming out of the next chicken’s rear end? See most any Facebook comments section for verification.

Two morals to this parable

Here are my own takeaways today:

1. Mine is not to judge whether other churchgoers or nones are sheep or chickens. But I feel that it is right to invite them to let go of defensiveness or contempt and to really discern who or what they are for themselves.

But let me say it more strongly and positively: Christ IS our shepherd and he’s good at it. We are his sheep, even when we slip into chicken-mindedness. Wherever we are today—even in peril—he is still with us and loves us. Every step of the road is important. This was true even when the prodigal son found himself in the pigpen. Even that experience was an essential step on his path of surrender towards real union with his Father.

When I joined the Orthodox Church and my wife did not, my godfather offered me these wise words: “Eden must be completely convinced that you are completely convinced that her way is holy. That God has her exactly where he wants her on the path at this moment in time.” It is not for either of us to judge the other’s faith, but to keep directing each other to the voice of the Shepherd.

2. The great need of the hour in American Christianity is not to bog down in arguments over our preferences in chicken barns!

Rather, it is to ask ourselves what factors contribute to sheep acting like chickens. Churchgoers must ask what conditions pervert open sheep pens into confined cages. Nones must examine what might cause some to follow any voice other than the Shepherd’s into ‘freedom’—for Jesus warns of thieves and robbers (and some even infiltrate the pen).

So whether we’re heading in or out, let’s do so at the invitation of the Shepherd, understanding that Christ calls and tends to every one of his sheep by name. And that may look very different from one Christ-follower to the next.

For further reading on caged vs. free range chickens, see this helpful article. http://www.onegreenplanet.org/animalsandnature/think-you-know-free-range-and-cage-free-chicken-think-again/
Posted by Brad Jersak at 12:51 PM