You've noticed that we're living in very violent times. At home, abroad ... to the point of exhaustion, hopelessness and/or numbness. I see no reprieve in sight and every reason to expect further escalation. I find myself in daily need of prayers that guard my heart and mind from both despair and the vengeance fantasies of repressed rage.

In that context, I have begun to pray the Lord's Prayer in a focused way on a daily basis with some new (to me) understanding about Christ's strategy in ordering the phrases in series as he does. Here is the part that seems super-relevant to us all right now:

This phrase calls me to forgive the sins of my enemies. And if we want to be a little technical, at least with the olde English, I think particularly of "trespassing sins." I remember wandering the gravel backroads of Manitoba, occasionally seeing signs that said, "Trespassers will be prosecuted" or less frequently, "Trespassers will be shot."

'Trespasses' brings to mind the violation of boundaries by intruders. It can include everything from military incursions and occupation to a rash of local break-and-entries to the pettiness of feeling someone push my buttons with an intrusive word or look or social media posting. 'Trespasses' are about crossing boundaries. My boundaries. Jesus knows how trespassers threaten us, offend us, tempt us to react ...

And he instructs us, "When(ever) you pray, pray this: 'Forgive us ...' He makes us own the sin of trespassing, as if somehow we should look in the mirror first. How have I crossed boundaries? How have I offended the other with my words or actions? How have I participated in trespassing on others' property, either historically or internationally by virtue of my citizenship? Who are those in the world right now who still live with the harm I have done to them personally or as part of my nation's sins?

Having pondered that, I then move to those who've trespassed against me. How many have truly harmed me? Who has actually invaded my space, my home, my nation. In my own case, that list is shorter and less extreme. Oh dear. It seems my own offences don't have a leg to stand on! I am disqualified from judging others for that which I am clearly also guilty. I cannot live in the land of grace while relegating those I hate (yes, hate) to the land of retribution and retaliation ... I can't even ask God for His vengeance of them when I'm pleading to avoid it myself.

But Jesus doesn't just move on to a new topic in the next phrase:

Lead us not into temptation

When someone trespasses on our lives, what are the particular temptations that we face? Almost universally, our temptation is to respond with either eye-for-an-eye retribution (and call it 'justice') or seventy-times-seven retaliation (we call it 'eradication'). Jesus knows this. He saw it in his own community, province and nation. The trespassers--the Roman occupation forces--had trampled on all that was sacred to them. Most especially their freedom. When an overwhelming military force enters your land, crushes your troops, imprisons and humiliates your young men, the overwhelming temptation is to strike back and to feel the righteousness of doing so. Retaliation becomes sacred. This was the temptation of Jesus' disciples. A few had even joined with the terrorist forces of his day.

And Jesus warns, that is the broad (or popular way) that leads to destruction. Don't do it. Pray that God would lead you away from that very tempting option. If you don't you can become drawn into retaliating to 'restore honour.' We can become so consumed with a sinful response that we become the evil we abhor. Which brings us to the next phrase:

But deliver us from evil (or 'the evil one')

When we are forgiven and have forgiven our trespassors, when we have been led out of the temptations of retribution and retaliation, we will find ourselves being saved from evil and the evil one.

As the apostles and the early church and now our spiritual siblings in war torn nations have discovered, this does NOT ensure that we will be delivered from trespassers, persecutors or even martyrdom. Rather, in the face of such threats (because for a suburban Canadian, really, that's almost all they ever are), the real evil we're praying against is the temptation to embrace the evil that would overtake our hearts. We need to pray fervently that we would not become the evil we thought we should attack. When, in our fear, grief and frustration, we abandon the Jesus Way and choose to answer trespasses with trespasses, the 'evil one' has actually trespassed and occupied our own hearts ... even in the comfort of the quietest and most peaceful cul-de-sac!

In these violent times, I find myself coming to these three phrases again and again: forgive as I forgive my trespassors, lead me out of the tempting reactions of retribution and retaliation, and deliver me from becoming the evil I want to overcome.

Kill or do nothing?

Somehow there has come to be a hardening binary that says the only options are "kill or sit by and do nothing." It ignores the power of peacebuilding as this impotent and passive non-response to evil. As if the Jesus Way were idle and ineffective. This is the voice of the enemy--a lie from the pit from which 'the destroyer' comes to wreak havoc.

The reality is that the Jesus Way, as Paul understood and preached it, seeks to 'overcome evil with good.' This has been poo-pooed as dangerously naive (ironically, especially by Christians). The truth is that the Jesus Way of enemy love is the only alternative to escalating violence, and it's as effective wherever it is creative (versus destructive). For those with the willingness to look more deeply at the Jesus Way of creative nonviolence, I leave you with the image below to the example of my friend, Jarrod McKenna, who is at the forefront of such efforts. 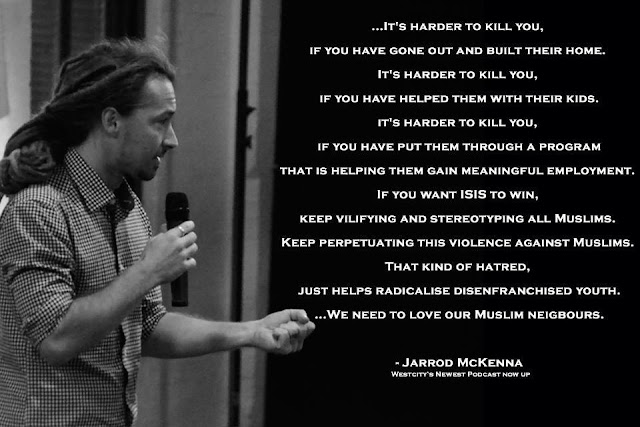