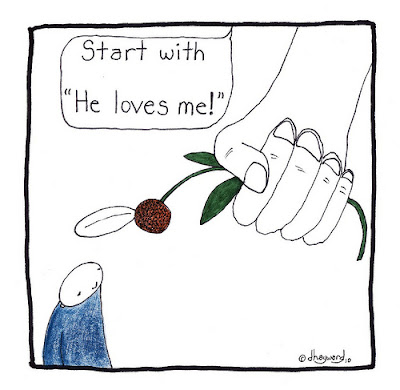 Dear friends, let us love one another, for love comes from God. Everyone who loves has been born of God and knows God. Whoever does not love does not know God, because God is love. This is how God showed his love among us: He sent his one and only Son into the world that we might live through him. This is love: not that we loved God, but that he loved us and sent his Son as an atoning sacrifice for our sins.

Dear friends, since God so loved us, we also ought to love one another. No one has ever seen God; but if we love one another, God lives in us and his love is made complete in us.

This is how we know that we live in him and he in us: He has given us of his Spirit. And we have seen and testify that the Father has sent his Son to be the Savior of the world. If anyone acknowledges that Jesus is the Son of God, God lives in them and they in God. And so we know and rely on the love God has for us.

God is love. Whoever lives in love lives in God, and God in them. This is how love is made complete among us so that we will have confidence on the day of judgment: In this world we are like Jesus.

Back in the “olden days,” when we had a crush on someone, and we weren’t really sure whether they liked us or not, most of us were too shy to find out directly—by asking. Times have changed, haven’t they? Back then we would find a flower and begin to pull its petals, playing the He Loves Me, He Loves Me Not game. The last petal left on the flower answered the question, didn’t it?

If you’re a “little older” like me I’m sure you played that game more than once. I remember playing the game literally, and then, when I grew too old for using a flower to determine whether a girl liked me or not, I would resort to other, equally silly and superstitious ways of making that determination.

Many of us, without critically analyzing it, attempt to understand our relationship with God by playing a similar game. In this most important relationship, we’re often not sure how God really feels about us, so we play a guessing game.

We play the He Loves Me, He Loves Me Not game with God because we are convinced his love is conditional. Even after we initially accepted God’s love, we keep playing the game. We torture ourselves, second-guessing God’s commitment to us with questions like, “Does he still love me—especially after what I did last week?” We wonder whether he has forgiven us—this time.

So around and around we go. We think, “Well, he must love me because I had a good day—or a good week.” Then we pull another petal from the flower of the days of our lives. We think about yesterday—or the day before that—or the week before—and we realize that our behavior was unlovable. So we conclude, “He loves me not.”

So, you think you’re too grown up to still be playing the He Loves Me, He Loves Me Not game? Answer this question, yes or no—“If you die tonight, or tomorrow, will you spend eternity with God, in his kingdom of heaven?”

Many avoid saying yes or no, and instead respond: “Well, I hope I am ready—I hope that God will be merciful—but I don’t want to sound proud and overly confident. I have tried to obey his commandments. I did my best. I went to church. I tried to be good”—and then they will often start reciting a long laundry list of duties and regulations they think that they must successfully do in order to qualify for God’s kingdom of heaven.

How confident are you about your relationship with God? Do you really know how God feels about you? Let’s take a look at a verse in the very next chapter that follows our keynote passage today:

I write these things to you who believe in the name of the Son of God so that you may know that you have eternal life.—1 John 5:13

John, concludes his entire letter, summarizing what motivated him to write and the key points he wants his readers to remember: “…so that you may know that you have eternal life.”

What wasn’t he saying? He was not saying that the only chance of eternal life his readers would have would be if they died and arrived “in heaven,” catching God on a good day when he was in the mood to allow people into his kingdom.

John was not saying that he was writing so that people would be motivated to qualify for God’s kingdom on the basis of their good deeds. What did he say? “… so that you may KNOW that you HAVE eternal life.”

What does that statement mean for the spiritual game so many of us are tempted to play, He Loves Me, He Loves Me Not?

“Know” is a word that John uses in this letter 26 times. One of the words he and other New Testament authors use elsewhere carries the idea of knowledge gained by having more exposure to it. As Peter says in his second letter, we grow in the grace and knowledge of our Lord and Savior (2 Peter 3:18).

But the Greek word that John uses when he tells us that we know we have eternal life suggests fullness of knowledge. The word conveys absolute, no-doubt-about-it, nothing-more-to discuss knowledge. This is a knowledge that you know today and you know next week and next month and next year and forever—this word means you are never going to know more about this topic, because there is no more to know.

Let’s summarize what our keynote passage tells us about our relationship with God:

And then, in 1 John 5:13, John says he wrote this letter so that those who believe in the name of the Son of God may know they have eternal life.

And this is the testimony: God has given us eternal life, and this life in his Son. Whoever has the Son has life; whoever does not have the Son of God does not have life. —1 John 5:11-12

God’s love—the relationship we have with him—is not a conditional gift. That’s why it’s silly to play He Loves Me, He Loves Me Not with God.

Because God loves you unconditionally, you don’t have to worry about what’s going to happen when you die. I don’t have to worry, thinking that when I show up at those metaphorical golden gates, Peter will check heaven’s database and say, “I’m sorry Greg, it seems you had a reservation but it got cancelled.”

“Well,” you may say, “that sounds like wishful thinking—now you’re really taking this grace thing too far.” You may say, “What about all those people who are lying, cheating, fornicating, drug-abusing, murdering derelicts—those gang-banging, hate-filled, lust-driven, greedy, self-centered people?”

When it comes to knowing of God’s unconditional, limitless love for us, and when it comes to accepting and receiving that love, there are four possibilities. Whether we play the He Loves Me, He Loves Me Not religious game or not—all of us fall into one of these four categories:

1) People who have no idea that God loves them—but he loves them anyway. God’s love does not depend on whether people know about it, acknowledge it or seek it. God loves us whether we like it or not. We don’t know why God has not fully revealed himself to everyone so that they are assured of his love—but based on the evidence all around us we have to conclude he hasn’t. Many, if not most, have not rejected God; they simply don’t know him at all.

3) People who believe that God loves them—but they are constantly worried about whether he still does. They are continuously torturing themselves as they play the game He Loves Me, He Loves Me Not. God already loves all the people who are playing the game.

4) People who live in Christ and, by God’s grace, have confidence that God really does love them. This is inner assurance, the same mindset as Christ Jesus (Phil. 2:5), given by God’s grace when we are resting in Christ. We are given the peace of God, which transcends all understanding (Phil. 4:7). Thus we are confident, not in our ability to please God, but in the work of Jesus Christ on our behalf.

Let’s take a quick look at another passage, from John’s gospel:

Then came the Festival of Dedication at Jerusalem. It was winter, and Jesus was in the temple courts walking in Solomon’s Colonnade. The Jews who were there gathered around him, saying, “How long will you keep us in suspense? If you are the Messiah, tell us plainly.”

Jesus answered, “I did tell you, but you do not believe. The works I do in my Father’s name testify about me, but you do not believe because you are not my sheep. My sheep listen to my voice; I know them, and they follow me. I give them eternal life, and they shall never perish; no one will snatch them out of my hand. My Father, who has given them to me, is greater than all; no one can snatch them out of my Father’s hand.
—John 10:22-29

When we say “But Jesus, I’ve done horrible things, even after  I accepted God’s love. You must not love me anymore,” Jesus says, I will never let you perish.

When we say, “But Jesus, I have lied, I have cheated, I have been divorced four times, and my kids hate me because I was a rotten parent when they were young,” Jesus says, I will never let you perish.

When someone says, “But Jesus, I’ve had two abortions, I’ve lived a promiscuous lifestyle, I’ve had a drug addiction—I know you can’t possibly be interested in me,” Jesus says, I will never let you perish.

“But Jesus, organized religion seems to have given up on me. I’ve been kicked out of three churches—they excommunicated me, disfellowshipped me and shunned me. How can you love me? Your church doesn’t!” Jesus says, Who told you those were my churches? You’re still in my church—if you want to be—if you surrender your life to me. I will never let you perish.

“But Jesus, I was such a self-righteous legalist. I was so filled with religious pride that I made some of those Pharisees in the New Testament look like a day in the park. I was a religious disaster. Can you ever forgive me?” Jesus says, I will never let you perish.

What kind of people does God love? According to the Bible, all of them (which means all of us) because “them is us”! Let’s remind ourselves of some biblical examples of the kinds of people God loves:

• What about David, a murderer and an adulterer after God made him king, but who, by God’s grace, became the greatest king of Israel?
• What about Peter, who proclaimed God’s grace to the world, yet had disowned and abandoned Christ? When Jesus was being tortured and beaten, the night before his crucifixion, Peter was asked if he was one of his followers—Peter cursed and swore that he had never known Jesus.
• What about Paul, the apostle of God’s grace, a man formerly known as Saul? In his pre-Christian life as the Saul of violent religion, Paul persecuted and tortured Christians. What about Saul, who was a legalist of all legalists? God transformed the Saul of religion into the Paul of his grace.

If God can love David, Peter and Paul—he can love you and me. And he does.
Posted by Brad Jersak at 1:10 PM