Why I Don't Think I'll Claim To Be Christian - Brad Jersak 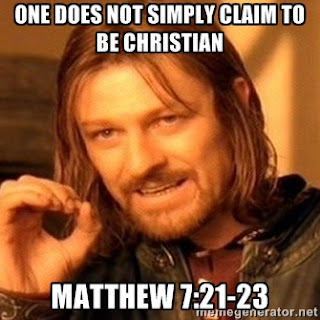 21 “Not everyone who says to Me, ‘Lord, Lord,’ shall enter the kingdom of heaven, but he who does the will of My Father in heaven. 22 Many will say to Me in that day, ‘Lord, Lord, have we not prophesied in Your name, cast out demons in Your name, and done many wonders in Your name?’ 23 And then I will declare to them, ‘I never knew you; depart from Me, you who practice lawlessness!’

2 It is required in stewards that one be found faithful. 3 But with me it is a very small thing that I should be judged by you or by a human court. In fact, I do not even judge myself. 4 For I know of nothing against myself, yet I am not justified by this; but He who judges me is the Lord. 5 Therefore judge nothing before the time, until the Lord comes, who will both bring to light the hidden things of darkness and reveal the counsels of the hearts. Then each one’s praise will come from God.

In 1972, I came to belief in Christ and consciously prayed for God's saving grace to come into my life. I was baptized on the confession of my faith in the name of the Father, Son and Holy Spirit. Later, was welcomed into membership at Calvary Baptist Church. After transferring membership to Bethel Mennonite Church, I also went on staff and was ordained as a Reverend by the Conference of Mennonites in BC. My ordination was also recognized by the Christian Ministers Association after we planted Fresh Wind Christian Fellowship. Many moons later, I was chrismated into the Eastern Orthodox Church (again, upon confession of the Symbol of Faith) and later, was ordained as a Reader.

None of this allows me to claim to be Christian. Many who say, 'Lord, Lord' will prove to be strangers before Christ on the Last Day.

None of this allows me to claim to be Christian. Many who serve 'In his name,' will prove to be strangers before Christ on the Last Day.

The stubborn fact is that it not by our claims, but by our fruit that Jesus recognizes living faith. Nor will the fruit he seeks be our spiritual pedigree or our relentless religiosity. It seems that he will actually be looking for the fruit of the grace of the Holy Spirit in our lives, whatever that means.

Claiming the fruit does not allow me to claim to be Christian. Only bearing the fruit will count on the last day.

The fruit of the grace of God's spirit cannot grow from the flesh of self-righteousness, striving or zeal. It can only grow on branches grafted to the Tree of Life, the Cross of Christ. Paul sure knew this:

None of this allows me to claim to be Christian.

While Christ warns us not to disown him before men, let he disown us before his Father (Matt. 10:33) ... and this I will not do. As my friend Sean says, 'neither brashly presuming nor cowardly denying.' For me, that's a given. Giving up my self-claims are not a repudiation of my Christ-claims. Not identifying as a Christian is not the same as dissociating from Christ before men. The latter does matter.


I know some readers value those great lists about our identity in Christ. They usually start with something like "I am a child of God. I am the righteousness of Christ ..." (and yes, there are ample biblical proof-texts for each claim).

"I am, I am, I am..." It feels a little too close to either Jesus' 'I am' statements in John or Satan's (supposedly) 'I will' statements in Isaiah 14. What's with the obsession with 'I' and 'MY' identity? In the Gospels, the real question was Christ's identity ... 'Who do you say that I AM?' As well intentioned as these identity lists are for people who feel like they never measure up, I can't help but think they reinforce that very problem. Maybe somehow theologically or ontologically, we want to positively claim our identity in Christ so ... why? So we'll act better? So we'll remember how we should be living but aren't? Or don't need to live because of some magic imputation in heaven?

None of this allows me to claim to be Christian.

So I won't. It seems that our self-claims to faith have actually done a great deal of harm. The politician, the businessman, the evangelist ... when do they ever claim to be Christian when it's not about trying to build the base or sign the contract or take the offering? Can you think of one reason why we would even bring it up that does not have something to do with establishing leverage for ourselves? The claim, "I'm a Christian" seems to preface all manner of intolerance, bigotry and fraud. Perhaps it raises suspicion for good reason. We used to use the fish symbol to identify other believers secretly in times of persecution. Now we use it on our business cards to ... what? Let others know that I would never overcharge them or fail to make a payment or break a contract? Perhaps worldly judges should hold us to that?

At first I thought, claims to my Christian faith are not up to me; they are up to other people who observe me. Let them perceive by my fruit whether I am Christian or not. Claim nothing. Let the jury decide.

But the problem with that is the jury is generally misinformed and unqualified. Claiming that I am Christian or not for me is above their pay grade too. Their verdict for or against, their claim that I am or am not Christian ... strike it from the court record.  His Honor alone knows the heart and has explicitly forbidden us from taking his seat. For a Christian to sit in the seat of judgment is, by definition, an oxymoron, since Christ himself issued a direct command against it. Francis was right: "Who am I to judge?"

Of course, I could cite those who claim I am a wonderful Christian ... practically a saint! But if I present their case to those I've hurt or offended through the years, they would truthfully and utterly falsify the claim. They could present solid evidence that I'm a hypocrite. And I could also cite those who say I'm a false teacher or a deceiver, but presented before the right collection of friends and colleagues, those accusations would be washed away, either by counter-evidence or at least by grace and love. No, friends and foes alike have insufficient evidence to condemn or congratulate our faith as hypocrisy or holiness. They can say mean things or pay great homage, but none of this allows me to claim to be Christian.

The apostle is clear: there is one Judge who can discern the fruit from the false. And He's not saying just yet. If there's fruit that lasts, it will be the fruit of grace alone, Christ alone. Not my claims or yours. John 1 says that those who receive Christ have the right to be called 'children of God' ... but it doesn't say, 'I have the right to call myself ...' It means that God will be righteous in calling us his children because of grace alone, Christ alone.

In the mean time, until further notice, I don't think I'll claim to be Christian. I've been given a different task: sharing the good news that God is love and that love looks exactly like Jesus.

Thought experiment: what if every time we felt the urge to claim to be Christian, we said that instead. To our neighbors: "God is love and that love looks exactly like Jesus." Our Christian neighbors, who might agree but are often waiting for the 'but ...' statements which divide us. Or our poor neighbors, for whom Jesus and the prophets made some claims on us. Or our gay neighbors, many of whom would agree and would surely welcome any change from bigotry. Or our Muslim neighbors, who might not agree but would certainly appreciate that more than hate-filled fear-mongering. And so on.

My point is that we might do well to take a break from claims of Christianity for ourselves (or our nation!) and refocus them on God's Christlike love, thus coming under that grace ourselves. Lord knows we all need it.