Citizens of Heaven by Greg Albrecht 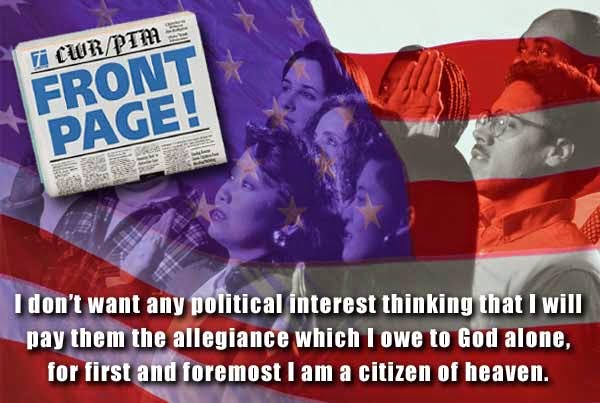 For, as I have often told you before and now say again even with tears, many live as enemies of the cross of Christ. Their destiny is destruction, their god is their stomach, and their glory is their shame. Their mind is on earthly things. But our citizenship is in heaven. And we eagerly await a Savior from there, the Lord Jesus Christ, who, by the power that enables him to bring everything under his control, will transform our lowly bodies so that they will be like his glorious body.—Philippians 3: 18-21

﻿﻿From the time I entered the mysterious world of adolescence, watching the 1960 political conventions on television, politics has always mysteriously attracted me. Politics has been one of my personal fascinations that I liken to that of the death wish of bugs on a hot summer night as they do their death dance, flirting with those electrified bug zappers.

Every time we have a presidential election I find this fatal attraction sucking me into the black hole of partisan rhetoric again. I don't mean to infer that it's wrong for a Christian to be politically involved. Some Christians believe that they should not only vote but be politically active. I recognize that perspective and respect those who hold it, but I still have reservations about jumping into bed with the bug zapper.

What does it mean to be a citizen of heaven?
CLICK HERE for the rest of the article
Posted by Brad Jersak at 3:43 PM