I Want to See - Greg Albrecht 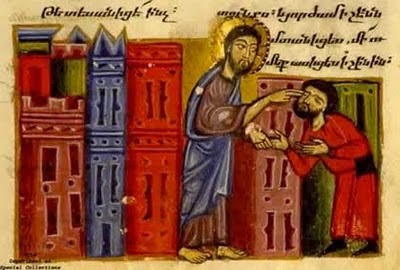 For the last time during his earthly ministry, Jesus was en route to Jerusalem. He had only a few days left in his earthly life—with every step he took toward Jerusalem he knew he was that much closer to the awful pain and suffering that awaited him. The road took him through Jericho, a city located about 17 miles northeast of Jerusalem. It was just before Passover—one of the three times in the year when pilgrims traveled to Jerusalem to celebrate the feasts of the old covenant. So the road was crowded with travelers, and as a result there were many others alongside the road—small businessmen and entrepreneurs, as well as beggars.

Mark 10:46-52 tells us that Jesus heard a cry as he walked through Jericho—"Jesus, Son of David, have mercy on me!" Many who were with Jesus told the man who was yelling to shut up. But the man persistently yelled even louder, "Son of David, have mercy on me!" Maybe these people who thought that they were helping and serving Jesus felt that their Master was far too busy and important to take time for a blind man.

Earlier in this chapter (Mark 10) we read the disciples had previously rebuked people who brought little children to Jesus—again, they assumed that they knew what was best for Jesus but Jesus rebuked the disciples who were misrepresenting him and said, "Let the little children come to me, and do not hinder them, for the kingdom of God belongs to such as these" (Mark 10:14).

CLICK HERE to read more
Posted by Brad Jersak at 10:13 AM