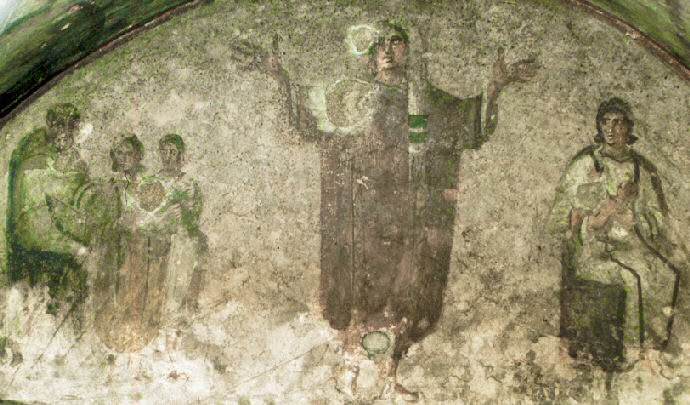 How do I wait when God seems to wait? When do I act as God's hands?
How do we wait for God's grace when we are called to be agents of God's grace?
"For the revelation awaits an appointed time; it speaks of the end and will not prove false. Though it linger, wait for it; it will certainly come and will not delay." (Hab. 2:3)
"God sees the truth, but waits." Leo Tolstoy
To me, this is a very difficult question, because rather than just asking God for a direct answer, the question itself puts us into a posture or place of waiting... potentially awkward or even painful waiting. But here's a little prayer exercise that may lead you into seeing what I'm seeing:
Step 1 - The Clenched Fist: With your right hand, make a tight fist and just look at it. This fist represents our acting independently of God. When we don't see God acting as we had expected or hoped, we are tempted to take matters into our own hands. Or we may try to force God's hand (as some think Judas did) by triggering a chaotic series of events ourselves. It's the raised fist of revolution--of force. Some words that I see in this fist are grasping, clinging, scheming, manipulating, mastering, making, taking. It's not a waiting hand. It's not a serving hand. It's the impatient fist of self-will that says, "If God won't do something, I will." It can masquerade as initiative, boldness, and courage ... as we make a suicide-charge out of the foxhole into the minefield of life. But there's an old saying, "Discretion is the better part of valour." Or in Jesus' words, "The Son can do nothing on his own initiative, but only what he sees the Father doing" (John 5:19). Of course, some of us learn the hard way. As one of my mentors once said in his southern drawl, "I've been bit by that dawg."
Step 2 - The Limp Wrist: Once bitten, twice shy. I.e. When acting independently of God goes very badly, the opposite temptation is paralysis. Hold out your left hand in front of you, palm down and let your wrist go as limp as possible (like Adam in Michelangelo's painting, "The Creation of Adam." This limp hand represents resignation. We may refuse to participate in the kingdom life, expecting God to act independently of us. When we don't see God acting as we had expected or hoped, we are tempted to sit on the sidelines as depressed observers or cynical critics. Words that I see on this lethargic or wounded hand are fatigue, despair, passivity, abdication, acquiescence, and relinquishment. It's the hand that says, "If God won't do something, why should I?" It can masquerade as patience and reflection ... as we numb out to the suffering of broken people and the darkness of our deteriorating cities. We've heard it said, "The only thing necessary for the triumph of evil is for good men to do nothing" (E. Burke). But of course, that proverb has been used all to often to rally the masses back to the clenched fist.
Is the dilemma obvious now? How do I wait for God's grace when I am an agent of God's grace.
[For keeners, the underlying problem is How is God immanent in the world when God doesn't intervene in the world? Hint: the mystery of the Cross]
Step 3 - The Open Hands: Finally, take both hands and open them in front of you, palms up like an expectant child. These are the hands of receptivity, waiting for grace in the person of Jesus. Open the eyes of your heart to see how he would come to you. Expect HIM but don't project onto him what he must do. On any given day, in any given circumstance, he may (i) hold your hands in his wounded hands as you wait together; (ii) he may place a symbolic gift in your hands that represents a grace he is offering (e.g. peace, patience, endurance, etc.); or (iii) he may ask to anoint and use your hands for some kingdom purpose (giving, serving, loving, healing, comforting, etc.). We may even become highly active and effective, but by waiting and listening first, our actions will be rooted in the Spirit rather than the self and thus empowered by grace to be grace in the world (as seen in the Sermon on the Mount).
So, how does Jesus come to you today? What does he do with these open hands? God's grace to you.
* For further thoughts on these three images, see this excerpt from Metro. Kallistos Ware.
Posted by Brad Jersak at 12:00 PM